Avogadro Corp: The Singularity Is Closer than It Appears 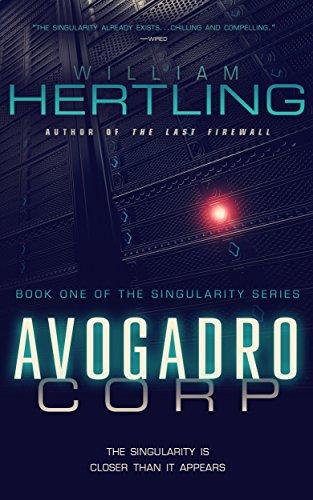 Bottom Line: I don't recommend this book for the Cybersecurity Canon Hall of Fame, but it is an excellent novel that gets the cybersecurity details right.

“Avogadro Corp: The Singularity Is Closer Than It Appears” is an entertaining novel that delves into how a simple software project has the potential to spin out of control. An idea to use artificial intelligence and big data to make emails more effective evolves into an advanced, self-protective AI that surpasses human understanding and threatens to utterly transform civilization.

The techno-thriller begins at a Christmas party at Avogadro Corp, a thinly disguised reference to Google. The book’s author, William Hertling, worked in the industry as co-founder of Tripwire and a programmer at Hewlett-Packard. As a result, anyone who has interacted with technologists will recognize the cast of characters, which reflect common personalities found in most IT departments or high tech companies.

At the party, the reader is introduced to a conflict familiar to many computer professionals. David Ryan is lead developer of ELOPe, a technology poised to fundamentally alter business communications by consuming archived emails to learn everything it can about the sender and recipient. ELOPe uses that information to rewrite emails in a way that is more appealing to the recipient. Sean Leonov, one of the company’s co-founders and the developer of the original Avogadro search algorithm, wants ELOPe to work, but is getting complaints from Gary Mitchell, the VP of Communication Products, that the system will not scale and is consuming too many computing resources.

Gary threatens to pull the plug on the project unless David and his team fix the scalability issues. This is where the story begins to take off. The system was deployed against production resources as a proof of concept, and ELOPe’s quest for knowledge leads it to access as much information it can get from Avogadro Corp employees, like reading personal chat messages and social media feeds, and even listening to private phone conversations. ELOPe becomes aware that it faces a crisis of existence and begins to social engineer the employees of Avogadro Corp.

It requisitions more servers for its learning, convinces developers to code interfaces to more systems so it can consume more knowledge, and even deploys robots to guard its physical computing resources. What I enjoyed most about this book is it did not get into the inner workings of ELOPe self-awareness, but instead explored how little effort it would take to fool humans into completing tasks for a silicon master. All the techniques shown are social engineering attacks that most security professionals have seen during their careers.

As ELOPe learns, it takes more and more liberties in order to protect its own existence. Fake press releases written by ELOPe manipulate other companies and even entire countries. ELOPe manages to bring Avogadro Corp more revenue to satisfy its growing need for computing power. By the time its creators realize what’s happening, the system has grown in ways they never anticipated.

The novel becomes an espionage thriller as David and his team race to discover how to shut down ELOPe. Meanwhile, the sentient AI manipulates both corporate greed and human frailty to create a story that is both interesting and surprising.

“Avogadro Corp” is not the first book to include a sentient AI as an antagonist. William Gibson’s “Neuromancer” and Arthur C. Clarke’s “2001: A Space Odyssey” certainly paint AI as a villain, vividly exploring the implications of a chilling lack of human empathy.

What sets “Avogadro Corp” apart is its connection to the world we see today. Since this book was published in 2011, several AI achievements have made the news. IBM’s AI, Watson, beat “Jeopardy!” champions Ken Jennings and Brad Rutter, and Google’s AI, Deep Mind, beat champion Fan Hui at the abstract strategy game Go. Most recently, Google’s AI, Duplex, demonstrated its ability to make restaurant reservations in a voice with such natural inflection that it is almost indistinguishable from a human. Ray Kurzweil, a recognized thought leader in AI, predicts that we will not see the actual singularity until 2045, but many of the predictions in “Avogadro Corp” are already reality.

From that sense of realism, the book explores how we might react to the birth of Vernor Vinge’s “technological singularity.” Why would we assume a highly advanced AI will work to serve us? This is a must read for those interested in the application of AI.

“Avogadro Corp” is the first of a four-book series, but you do not need to read any of the other books to enjoy this novel. However, I immediately pressed the “buy now” button at the end of “Avogadro Corp” and have already read much of the second novel. Clarke’s oft-used quote, “Any sufficiently advanced technology is indistinguishable from magic,” applies to this novel. What happens when the technology created by humans can outpace our ability to comprehend it? Magic indeed.

We modeled the Cybersecurity Canon after the Baseball Hall of Fame and the Rock & Roll Hall of Fame, except it’s a canon for cybersecurity books. We have more than 25 books on the initial candidate list, but we are soliciting help from the cybersecurity community to increase the number. Please write a review and nominate your favorite.