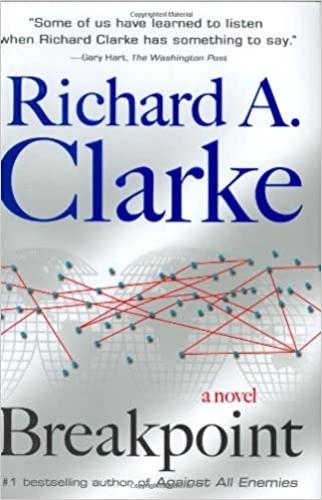 In an earlier entry I looked at Richard Clarke’s Cyber War, and this time around I’ll look at how Clarke jams a boatload of cutting edge cybersecurity ideas into this slim, Michael Crichton-esque political thriller. Clarke wrote it in 2007 but set it in the near future of 2012 and when I say there is a boatload of information, I am talking about yacht-sized, not dingy-sized.

The bad guys in this novel execute most of the cyber fantasy attacks against the United States that any group of cybersecurity geeks (including myself) could conjure up after a few beers sitting around a bar at the annual Black Hat / DEFCON conventions in Vegas (incidentally, one of the settings in the book).

Clarke gives us bombings of US beachhead routers on both coasts that reduce inbound and outbound internet traffic to just 10 percent, buffer overflow attacks against a communications satellite that sends it reeling out to space, SCADA attacks that blow up a research institution with a live nuclear reactor and a well-coordinated SCADA attack that takes out all power west of the Mississippi. Of course, in the novel, US government leadership, specifically the Intelligence Community (IC), thinks the Chinese are behind everything and they put all of their efforts into proving it.

All of these “fantasy” attacks are quite possible in the real world and the cybersecurity community has been talking about them for at least the last decade. At Palo Alto Networks, for example, we spend a lot of time looking at SCADA security and the challenges in securing such systems. (One of our experts, Del Rodillas, is speaking on the topic at an ISC-ISAC event on January 22.)

Clarke definitely knows the landscape. Before he retired from government service, he served three different Presidents as the Special Assistant to the President for Global Affairs, the National Coordinator for Security and Counterterrorism and the Special Advisor to the President for Cybersecurity. The political theory behind these acts is known as Escalation Dominance. It is the idea that China, or any government really, would launch some kind of attack against the US that would hurt the country in an effort to prove that they could launch a much larger attack that would really hurt if the US did something that the opposing government did not like.

In the afterword to this novel, Clarke said that it was easier to talk about these issues in a fictional setting then it was to talk about them in dry, academic and political journals. I concur – and that’s one reason why I’ve included novels and “lighter” books in my selections the Cybersecurity Canon. The truth is that many of these things are much more exciting and frightening when splashed across the fictional page.

This is a good read. Clarke’s story races across 10 days in March of 2012 as our heroes, Susan Connor – an agent for the Intelligence Analysis Center (IAC) – and Jim Foley – an ex-marine on loan to the IAC from the NYPD -- try to out-think the US Intelligence Apparatus and Law Enforcement community and track down the real culprits behind the Internet attacks. Critics have taken Clarke to task for his wooden characters in the story, but I found that not to be true. I liked his portrayal of the misguided Internet billionaire especially and I liked the way he portrays New York and Boston cops.

The bottom line here is that this is book is a fun political thriller that gets the cybersecurity stuff right. I recommend it.