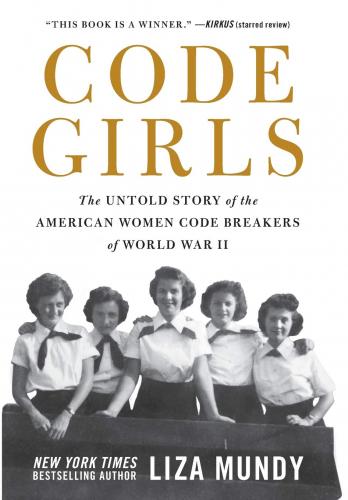 Bottom Line: I recommend this book for the Cybersecurity Canon Hall of Fame

In “Code Girls,” Liza Mundy explores the previously untold story, and largely unrecognized contributions, of the first women to officially serve as part of World War II U.S. intelligence code breaking efforts. With approximately 11,000 women hired, they comprised more than 50% of the 20,000 code breaking workers. Based on voluminous research from the National Cryptologic Museum and the National Archives, Mundy brings to life these civilian and military women’s stories as they decrypted messages from the enemy Axis Powers, thereby significantly advancing the Allied war effort. Meticulously researched, this work provides fascinating insights for all who have an interest in women’s contributions and progress within the military as well as mathematics and computing professions.

Historians, intelligence and cyber professionals, and feminists should find it especially illuminating. Mundy paints a vibrant picture of the challenges faced by the Allies as well as the workplace, living conditions, personal stories and struggles experienced by these women code breakers executing their classified mission. This book does not extensively cover the methods and techniques of code breaking; instead, the author wonderfully combines personal firsthand stories from these women’s lives with the significant impact their sacrifice and efforts had on strategic intelligence supporting military operations, thereby turning the tide of a seemingly unwinnable war into ultimate victory. Similar to the style of the popular movie and book Hidden Figures in describing African American women’s contributions to the Space Race, Code Girls brings to light the substantial contributions women made in intelligence gathering during World War II.

Recalling the pervasive operational security (OPSEC) initiatives during World War II, such as “loose lips sink ships” or “somebody talked,” it is not difficult to ascertain why the stories of approximately 11,000 female code breakers were mostly left out of history books. Those who served were strongly encouraged to maintain OPSEC, and the U.S. government itself was slow to declassify the salient details, withholding them until the 1990s. The author pieces together a compelling and coherent narrative from thousands of boxes of records, rosters, memos, declassified reviews and other documents. She also convinced about 20 of the women to relate their personal stories. If this research had started earlier, more of these primary sources would have been available to provide commentary, although perhaps not all would have been willing.

The first code breaking recruits were brought into the Army and Navy as civilians. Their numbers would grow from the low hundreds on the eve of Pearl Harbor, to about 7,000 in the Army and 4,000 in the Navy in 1945. For many, this was their first paid employment. The work was not glamorous, and men were not eager to fill these roles. Nonetheless, the women were screened to see if they had sufficient grit to handle the demanding assignment. Aptitude tests rated them as clerical, technical or analytic. Those that scored the highest were rated as analytic and would serve in a code breaking assignment.

Despite the propaganda, the war was not going well during the early days, and code breakers were learning their trade as they went. Readers of this book may not necessarily walk away understanding how code breaking worked, but Mundy emphasizes that success in the assignment required a greater memory than similar assignments do today. The tasks, comparing and recognizing patterns, provided much more of a mental challenge with the absence of modern computers, artificial intelligence or electronic devices to assist with the tasks.

One example of these pioneers, Mundy writes in "Code Girls," was Agnes Driscoll, who was a young mathematics teacher initially recruited to be a stenographer. After being transferred to the Navy’s postal and censorship office, she began to methodically decode messages of the Japanese fleet code throughout the 1920s and 1930s. She eventually became such an expert that she taught code breaking to men, who then received approximately 25-30% higher compensation. For example, a 1941 Navy memo proposed paying female clerks, typists and stenographers $1,440 per year, while men in these positions were to be paid $1,620. For Ph.Ds, the gender gap increased, as females were paid $2,300 compared with $3,200 for males. Because it was not yet illegal (through the Civil Rights Equal Pay Act of 1964) to fail to provide “equal pay for equal work,” female code breakers were paid less than men for the same tasks.

One interesting anecdote from “Code Girls” hints at OPSEC’s impact on daily life. It is widely acknowledged that everyone was called upon to support and sacrifice to further the war effort. In stark contrast to today’s society, the public was encouraged to transport those in uniform. In doing so, they would inquire about the servicemember’s duties. It was impressed upon the women that if anyone should ask, they were to discourage further engagement on the issue by answering that they were doing clerical work, sharpening pencils or filling ink blots. In one instance, unbeknownst to the female code breaker, a Navy admiral in civilian clothes was the one inquiring; when the code breaker answered, “Clerical work,” the admiral gave her a wink, wordlessly conveying that she passed the secrecy test. OPSEC had been maintained!

While the author, a veteran writer on women’s issues, does glorify these women, she recognizes their challenges and the toll of the work upon them. As the U.S. propaganda machine was steadily conveying a message of success to the public, the code breakers were privy to the grim realities of where the enemy was targeting, and whose husbands, fiancés or brothers were casualties of war. The secrecy of the mission was so isolating that even code breaking roommates did not discuss their work with one another. As a result, many broke down, and some would abuse alcohol to cope with the stress and isolation. It was post-traumatic stress disorder (PTSD) before it had a name or treatments. Because of the delay in declassifying these efforts, families of the code breakers did not learn until much later that these women were doing more than some clerical function.

Liza Mundy succeeds in penetrating the prolonged OPSEC by bringing the story of women code breakers to life. Not only could these 11,000 women do what was asked, they did, while also fighting an uphill battle of gender discrimination before the passage of civil rights laws that would mandate equal pay and decent working conditions. Mundy shows that the steadfast devotion to duty of these silent patriots contributed to the Allies’ successes, and it is fitting that their stories are finally told, resulting in the admiration and recognition they richly deserve.

This review was originally published in the Spring 2019 issue of The Cyber Defense Review.