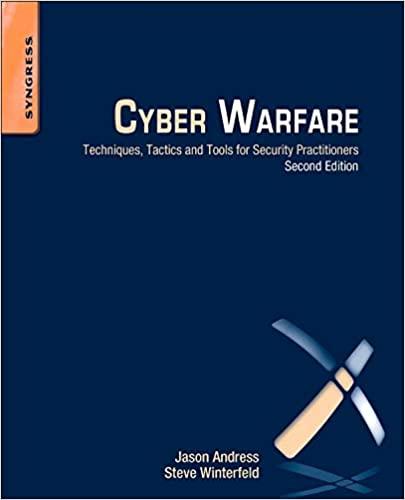 Cyber Warfare: Techniques, Tactics and Tools for Security Practitioners is a consolidation of the current thinking around the topic of cyber warfare -- not the way you hear about in the media where everything is a war of some kind (War on drugs, War on Terrorism, etc) but a discussion about what it means to conduct warfare via cyberspace.

This is a tough topic because there are so many opinions about what cyber warfare is that you could literally spend an entire book just covering the definitions. The authors deftly avoid that trap and manage to provide a coherent line of thinking around Computer Network Operations even when these kinds of activities bump up against other cyber space dangers like cyber crime, cyber hacktivism, cyber espionage and cyber terrorism. This book is a primer; a one stop shop to get you up to speed on the topic if you are new to it or a refresher even if you have been enmeshed in it for years. It is Cybersecurity Canon-worthy and you should have read it by now.

Full disclosure: One of the authors, Steve Winterfeld, used to work for me when he and I were both in the US Army wrestling with all of these ideas right after 9/11. I ran the Army Computer Emergency Response Team (ACERT) and Steve ran the Army’s Southern Regional CERT (RCERT South). He and I have been friends ever since and he even quoted me in one of the back chapters.

Winterfeld and Andress cover everything you will want to consider when thinking about how to use cyberspace to conduct warfare operations. Although the content has been around for a while, it is striking how little the main concepts have changed in the past decade. In a world where new innovations completely alter the popular culture every 18 months, the idea that cyber warfare’s operational principals remain static year after year is counterintuitive. But after reading through the various issues within though, you begin to understand why things change at such a glacial pace. These difficult concepts spawn intractable problems and the authors do a good job of explaining them.

The first three chapters are my favorites. Winterfield and Andress do a good job of wrapping their heads around entangled concepts like the definition of cyber warfare, the look of a cyber battle space and the current doctrine’s ideas about cyber warfare from the perspective of various nations. It is fascinating. They frustratingly never define what cyber warfare is. Unlike Clarke and Knake in Cyber Warfare: The Next Threat to National Security and What to Do about It, where the authors give a straight forward definition, Winterfeld and Andress describe the plethora of definitions around the community and decide that one more would just confuse the matter.

In the middle of the book, the authors take on the task of describing the Computer Network Operations (CNO) Spectrum, which ranges from the very passive form of Computer Network Defense (CND) through the more active forms of Computer Network Exploitation (CNE) and Computer Network Attack (CNA). It is indeed a spectrum too because the delineation between where CND, CNE and CNA start and stop is not always clean and precise. There is overlap. And somewhere along that same spectrum is where law enforcement organizations and counter-intelligence groups operate. You can get lost fairly quickly without a guide and the authors provide that function admirably. The only thing missing from these chapters is a nice diagram that encapsulates the concept.

I do have a slight issue with the book’s subtitle, which is “Techniques, Tactics and Tools for Security Practitioners.” The way I read this book, the general purpose Security Practitioner will not find this book very useful except as background information. Aside from the chapters on Logical Weapons, Social Networking and Computer Network Defense, most of the material has to do with how a nation state, mostly the US, prepares to fight in cyberspace. There is overlap for the general-purpose security practitioner, but this material is covered in more detail in other books.

The book is illustrated. Some of the graphics are right out of military manuals and have that PowerPoint Ranger look about them. Some are screenshots of the various tools presented. Others are pictures of different equipment. One graphic stood out for me in the Cyberspace Challenges chapter (14). The graphic in question is a neat Venn Diagram that encapsulates all of the cyber warfare issues mentioned in the book, categorizes the complexity of each issue and shows where they overlap in terms of policy, processes, organization, tech, people and skills. My only ding on the diagram is that in the same chapter, the authors discuss how much each issue might cost to overcome. It would have been easy to represent that information on the Venn diagram and make it more complete.

One last observation about the graphics that I really liked is the author’s use of “Tip” and “Note” boxes throughout the book. Scattered throughout the chapters are grayed-out text boxes that talk about some technology or procedure that is related to the chapter information but not directly. For example, in the Social Engineering chapter (7), the authors placed a “Note” describing the various Phishing forms. You do not need the information to understand the chapter but having it nearby provides the reader with a nice example to solidify the main arguments. The book is full of these examples.

Winterfeld and Andress get high marks for encapsulating this complex material into an easy-to-understand manual -- a foundational document that most military cyber warriors should have at their fingertips and a book that should reside on the shelf of anybody interested in the topic. Along the way the reader gets a nice primer on the legal issues surrounding cyber warfare, the ethics that apply, what it takes to be a cyber warrior and a small glimpse over the horizon about what the future of Cyber Warfare might bring. This is Cybersecurity Canon-worthy and you should have read it by now.