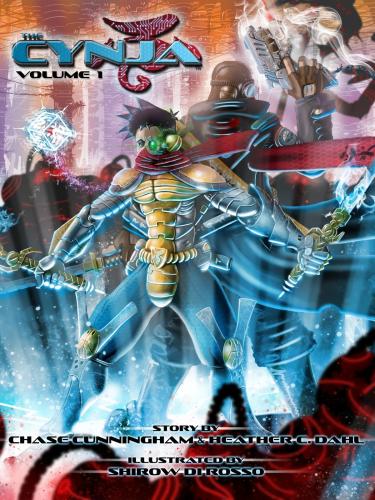 Chase Cunningham, Heather Dahl and Shirow Di Ross are the authors of a delightful comic book series, The Cynja, that targets young people with a Matrix/Anime-styled story that also introduces basic cybersecurity concepts. So far, they have published two books in a planned-for trilogy and a color/activity book that complements the series. The first two published comic books are not typical entries for the Cybersecurity Canon project. They target elementary school kids as the main audience, but they are wonderfully imaginative gateway books that might be our first step in finding and encouraging the next generation of network defenders. They will not make your kids experts at cybersecurity, by any means, but they will introduce them to the subject and perhaps encourage them to pursue further study in the field. At the very least, they will enlighten readers – elementary school students and the parents, grandparents, aunts and uncles, nannies, etc. who read along – to the common sense idea of being safe in cyberspace, as well as that cybersecurity might be a good activity to pursue as a future profession or hobby. In that way, the series is Cybersecurity Canon-worthy, and you should have read it by now.

The network defender community is well aware of the fact that the pipeline for trained cybersecurity professionals is not big enough to sustain what is needed in the near future. Many of us believe that the community has to reach deeper into the educational system, past the college and high school student populations, to capture the interest of elementary school students in order to fill the future void. Wonderful initiatives, such as the Air Force Association’s CyberPatriot program that offers Capture the Flag contests, summer AFA CyberCamps and educational material designed for elementary school students, go a long way to service this young population. More is obviously needed. At the annual Black Hat hacker conference in Las Vegas this year, I met two people trying to help. Chase Cunningham and Heather Dahl, along with their illustrator, Shirow Di Ross, are the authors of a delightful comic book series, The Cynja, that targets young people with a Matrix/Anime-styled story that also introduces basic cybersecurity concepts. So far, they have published two books in a planned-for trilogy and a color/activity book that complements the series.

The story of The Cynja begins with our hero, Grant, who prefers to invent new computer games rather then doing his homework. His computer teacher, Mr. Hughes, recognizes Grant’s potential and recruits him into the Cynja (aka “cyber ninja”) ranks. Mr. Hughes becomes Grant’s Cynsei, and together they battle their nemesis in cyberspace: The Botmaster.

The first volume tells the story of how the Cynsei teaches Grant the ways of the Cynja and chronicles Grant’s first battle with The Botmaster. Through beautiful artwork and action-oriented, comic-book-style storytelling, young readers will be thrilled and amazed. Along the way, the authors introduce advanced cybersecurity concepts that compel the story without getting in the way. “Introduce” is the key word here. This is not a textbook. The authors use the words in the background as they tell the tale:

Code of the Cynja (Volume 2)

In the second volume, the Cynsei recruits another Cynja, Jo Alita, who likes to analyze code and solve math puzzles. At the same time, the Botmaster recruits Polu, a polymorphic virus to help him with his evil ways. The authors again present an array of advanced concepts:

These first two volumes of The Cynja comic book series will not make your kids experts at cybersecurity. That is not the intent. When I talked to the authors, Chase Cunningham and Heather Dahl, they said they wanted a vehicle to introduce the concepts of cybersecurity to a young audience that was fun and exciting but also might act as a bridge to spur further interest. I think they accomplished that admirably. Adults who read along with their kids might get something out of this too. The comic-book-style storytelling is a perfect medium to accomplish the authors’ goals. The artwork jumps off the page. The two young Cynjas remind me of the classic Star Wars characters: Luke and Leia. Grant is the wisecracking hero want-to-be who makes mistakes and is guided by his Cynsei. Jo is the smart, no-nonsense leader who gets things done. The cast is diverse in both ethnicity and gender. The Cynsei teaches his young apprentices the Code of the Cynja – that it is our responsibility to be safe and vigilant in cyberspace and that learning is our superpower. That is a powerful code.

The Cynja comic book series is not a typical entry for the Cybersecurity Canon project. It is definitely not a must-read for all cybersecurity professionals. That said, these are the books that you hand to your kids, your nieces and nephews, your relatives, and your neighbors when they ask about what you do. They are the perfect Christmas or birthday gift. Adding a page to the Cynsei’s Code of the Cynja: it is the network defender’s responsibility to train the next generation of cybersecurity professionals. These comic books might be our first step in helping us find and encourage our replacements. In that way, they are Cybersecurity Canon-worthy, and you should have read them by now. More importantly, the network defender community needs to ensure that we get as many of these books into the hands of young people as we possibly can.

Learn More About The Cynja