The rampage of incessant cyber attacks have caused the disclosure of billions of users’ private data, shaking the Internet to its core. In response, various data privacy laws and regulations have emerged, forcing the industry to change their practice and bringing the demand for large-scale secure computing to the spotlight. Such a demand, however, cannot be met by the state-of-the-art cryptographic techniques, even with decades of effort, due to the the overheads (speed, bandwidth consumption) they incur. To narrow the gap, recent years have seen rapid progress in hardware based trusted execution environments (TEE), such as Intel SGX, AMD SEV and ARM TrustZone, which enable efficient computation on encrypted data within a secure enclave established by a trusted processor.  In this talk,  I will present our research on understanding and addressing the security challenges in this new secure computing paradigm and enhancing its design to achieve scalability, for the purpose of supporting accelerated machine learning.  Further I will discuss big questions that need to be answered in the area and introduce our genome privacy competition as a synergic activity that helps move the science in this area forward. 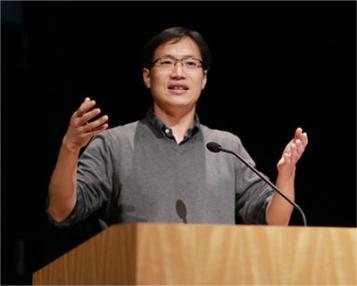 Dr. XiaoFeng Wang is a James H. Rudy Professor at Indiana University, Director of IU’s security program, Co-director of IU’s Center for Security and Privacy in Informatics, Computing and Engineering, and the Vice Chair of ACM SIGSAC (special interest group on security, audit and control).  He also served as a PC Co-Chair for the ACM Conference on Computer and Communications Security (CCS), the ACM’s flagship security and privacy conference during 2018 and 2019.  Dr. Wang received his Ph.D. in Electrical and Computer Engineering from Carnegie Mellon University.  He is considered to be among the most prominent system security researchers, a top author according to online statistics such as csrankings.org and system security circus (ranked #5 among 7,600 authors during the past 18 years), and a most influential scholar in security and privacy according to AMiner AI 2000. Dr. Wang is known for his high-impact research on security analysis of real-world systems and biomedical data privacy. Particularly, the projects he led on novel side channel analysis and discovery, payment and single-sign-on API integration, Android and iOS security and IoT protection have changed the way the industry built secure computing systems.  Also he is a pioneer researcher on human genome privacy and a co-founder of the iDASH Genome Privacy Competition that narrows the gap between security and cryptography research and real-world demands for privacy-preserving biomedical data sharing and computing. More recently, he is actively working on confidential computing, AI security, security in cellular networks, Cybercrimes, and IoT security. For his work, Dr. Wang has received numerous awards, including Award for Outstanding Research in Privacy Enhancing Technologies (the PET Award), Best Practical Paper Award at the 32nd IEEE Symposium on Security and Privacy, Distinguished Paper Awards at the 26th Network and Distributed System Security Symposium (NDSS) and IEEE Fellow (for contributions to system security and genomic privacy).  His research has been extensively reported by public media, including CNN, MSNBC, Forbes, Slashdot, Nature News, etc.