“Habeas Data: Privacy vs. the Rise of Surveillance Tech” Review 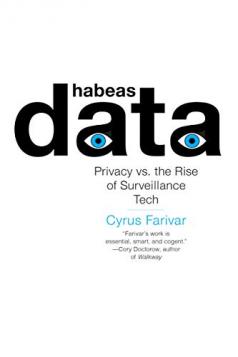 I do not recommend this book for the Cybersecurity Canon Hall of Fame.

Put simply, I cannot recommend “Habeas Data” to others.  I personally found this book to be written almost exclusively from a privacy and civil liberties advocacy perspective.  In turn, it fails to convey the vantage point of other sides and refrains from mere speculation that there may in fact be another side at all.

In full disclosure, I formerly worked in the intelligence community for nearly a decade.  First, as an attorney in the Office of General Counsel at the National Security Agency, then at the Office of the Director of National Intelligence’s National Counterterrorism Center.  I now serve as Counsel for the Senate Select Committee on Intelligence, a position which I still occupy today.  I am therefore well versed in the authorities that permit the collection of sensitive data to protect our national security.  But along with that goes a healthy dose of skepticism of what is or is not permissible and where the lines are or ought to be drawn in the sand.  Federal employees are trained to question, to adhere to the letter of the law, and remain responsive to evolutions both in jurisprudence – which is often slow to catch up to advances in technology – and in public opinion.  It is to this latter element, that of public opinion, that I found the author Cyrus Farivar, the senior business editor at Ars Tecnica, to be blindly adherent to the disservice of his readers.

Don’t get me wrong, “Habeas Data” does provide a thorough high-level overview of a plethora of issues that dominate public discourse to this day.  Beginning with the case law setting forth what does/does not constitute a violation of one’s Fourth Amendment rights and the concept of reasonable expectation of privacy to e-mail and satellite-based tracking, the story is told in a series of vignettes based on a particular case or event, each easily divisible from the remainder of the book.  The result is what I found to be a fragmented and choppy read that jumps quickly from one topic to the next.  Just as one gets immersed into the facts of a particular case, the reader is transported to another with its own set of facts and implications.

A disproportionate majority of the book pertains to current technology and, in particular, that of the cell phone and how to translate the text of the Fourth Amendment to a reality that was not envisioned.  For example, what constitutes a search that is “unreasonable”?  What was meant by the Founding Fathers when the text states “The right of the People to be secure in their persons, houses, papers and effects…”  This lies at the heart of the book - how to take that language and apply it to the advances that dominate our lives today.

As I read this book, the problem I had was the author’s failure to articulate beyond mere dismissal there being another side of the coin.  Instead, beginning with the chapter titles themselves, e.g. “When Big Brother Rides in the Back Seat” and “Who Watches the Watchers?” the reader is left with the advocacy of a civil libertarian in many ways, one impacted greatly by the revelations of Edward Snowden versus attempts by the policymakers to balance the interest of privacy with the need to retain public safety and national security.

The title “Habeas Data” itself borrows from a German-derived form of habeas corpus, “permitting an individual to obtain data from corporations or government agencies for the purpose of verifying it, modifying it, or perhaps even deleting it.” (p. xvii) Many authoritarian regimes in fact codified this concept into law.  The author tries to apply this concept to America, a country in which public records laws at both the state and federal levels exist in which there is no affirmative right to receive such information from corporations.  Mr. Farivar translates this to mean that there is no inherent right to privacy in the U.S.  I disagree with this conclusion – sure, we may not have a written “right to privacy” explicitly in the nation’s founding documents or statutory provisions but it is inherent to who we are as Americans.  I think the inability of the author to extract himself from a traditionally Euro-centric perspective and apply it to the U.S. is a significant detraction of the entire body of work and glosses over the unique attributes that lie at the heart of the American legal system.

Please do not get me wrong, I do not intend to convey that all is negative in “Habeas Data.”  The author succeeds in lending insight into efforts by state and local officials such as in Oakland, California, to take matters into their own hands.  In that city officials, activists, and the police succeeded in working together to discuss the realities of modern law enforcement and conjure ways for all sides to agree.  Mr. Farivar also provides helpful narrative on the baseline sets of facts that are relevant to the most important Fourth Amendment cases in American jurisprudence.  In doing so, readers not steeped in the law are able to quickly and easily be brought up to speed on the general contours of the controversies adjudicated by the Supreme Court.

In the end, I found this book to be useful for a reader who already is perhaps predisposed to the perspective espoused by the author.  To readers with other preconceived notions however, it fails to both illuminate the value of that perspective or persuade him/her towards that end.  The title itself says it all –conveying the idea of there being an ongoing adversarial relationship between privacy on the one hand and technology on another.  But the current predicament is not adversarial.  Rather it involves reconciling the principles on which our nation was founded with the constant and ceaseless advances in technology.  Both of these elements are not going away.  Rather than pit one against the other, we need to work continuously and adjust for them to coexist.