Cybersecurity Canon Book Review: The Fifth Domain: Defending Our Country, Our Companies, and Ourselves in the Age of Cyber Threats 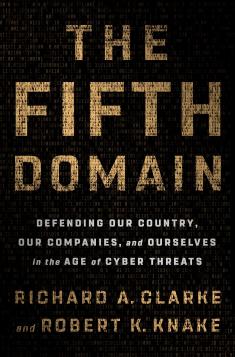 "The Fifth Domain” is the perfect Hall of Fame book. It is part history (see timeline below), part big ideas, part fanboy service to the cybersecurity industry’s biggest thought leaders, and finally, it is a look into the future with regard to near-term technologies—such as 5G, quantum computing, and artificial intelligence—and how they might impact the security landscape as well as what the network defender community should be considering in order to influence how they are deployed.

One side note: I got the opportunity to interview the authors during Cybersecurity Canon Week this year at the CyberWire's network of podcasts. I teased both Dick and Rob during the interview that the best way to get people talking about their book was to write a paragraph or two about some of our industry’s thought leaders and their pet projects. Well, that is exactly what they did:

In terms of history, they focused on a theme that has been covered from different angles in other Cybersecurity Canon books too this past year: David Sanger’s "The Perfect Weapon: How the Cyber Arms Race Set the World Afire” and  Andy Greenburg’s "Sandworm: A New Era of Cyberwar and the Hunt for the Kremlin's Most Dangerous Hackers.” That theme is the continuous low level cyber conflict that has been going on by and between key nation-states like the United States, Russia, China, Iran, and North Korea for the past decade or more.

For big ideas, they have a sack of them:

For technology, they lay out the case for why 5G, quantum computing, and artificial intelligence will each be a game changer in their own right. From my perspective, once 5G is available everywhere, everything will be connected to the internet at very high speeds—and I mean everything. It will no longer be a joke that your toaster is connected to the internet. In the next decade, we will forget why we thought that connected toasters were funny in that yesteryear of 2020. It will be the standard. But, the big one-two punch of near-future technology is quantum computing plus AI. We are probably within a decade of having an affordable quantum computer that operates with 128 qubits. The NSA math nerds are already so afraid of this because of the implications of breaking all of their cryptographic cyphers that they are hard at work developing the next generation of cyphers that can withstand quantum computer speed. From my science fiction side though, once we hit 128 qubits in quantum computing, the artificial intelligence singularity will not be far behind—that moment when a computer algorithm becomes aware of itself. With a quantum computer, this achievement will no longer be just past our reach.

I have one tiny suggestion for books of this sort like Sandworm and Perfect Weapon. When you are talking about important events, especially when you are not doing it in chronological order, it would be super helpful to include a timeline at the end of the book like the one I list below. For example, it is one thing to discuss WannaCry and NotPetya as separate events, but when you see that they are separated by only weeks, that has meaning. Also, put the day and month on the timeline. That would be helpful.

As I said, the Cybersecurity Canon Committee has already selected this book for the Hall of Fame. It is already a must read, but do yourself a favor. Put this on top of your reading queue. This one is important.

"A Declaration of the Independence of Cyberspace,” by John Perry Barlow, EFF, 8 February 1996.

"Patch Exchange already, will ya? GoldenSpy lurks in tax software Chinese banks prefer their foreign clients to use. Magecart gets cleverer. Another unsecured AWS S3 bucket, and this one’s not funny,” The Daily Podcast, The CyberWire, interview with Richard Clarke and Robert Knake, Minute 9:40, 6 June 2020.

"Sandworm: A New Era of Cyberwar and the Hunt for the Kremlin's Most Dangerous Hackers,” by Andy Greenberg, Doubleday, 7 May 2019.

"The Fifth Domain: Dending Our Country, Our Companies, and Ourselves in the Age of Cyber Threats,” by Richard Clarke and Robert Knake, Penguin Press, July 16, 2019.

Cybersecurity Canon Book Review: “The Cybersecurity Playbook: How every leader and employee can contribute to a culture of security” (2019) by Allison Cerra