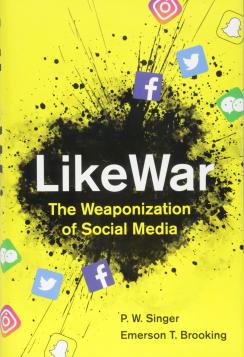 “Like War: The Weaponization of Social Media” by P.W. Singer and Emerson T. Brooking (Published 2018)

Bottom Line: I recommend this book for the Cybersecurity Canon Hall of Fame Review

I highly recommend “Like War,” particularly for those who are somewhat familiar with the concepts of misinformation, disinformation, and manipulation but are eager to take a deeper dive into their significance.

Authors P.W. Singer and Emerson T. Booking are defense experts. They contend that age-old cyber-related concepts of gamesmanship are now being waged in new ways on the internet by everyone from the teenager next door to highly advanced nation-state actors. Their argument is made tangible by their able use of carefully selected real world stories as the lens through which the reader can relate, either by their own personal experiences (e.g. sharing viral links on the social media site of choice) or by having lived through the events as they unfolded (e.g. 2016 Presidential election). The stories showcase the impact on people’s daily lives through the spread of social media platforms such as Facebook, Twitter, and Instagram, among others.

The authors begin by setting the reader on a course to understand what they characterize as the “weaponization of social media,” whereby cyberspace in the form of the internet is modifying warfare and politics and vice versa. The questions they raise are provocative.

Is there such thing as a secret in a networked world? Does social media put a spotlight on the truth and thus expose it or does social media instead make it ever more difficult to distinguish fact from fiction? And finally, in an age of bots and artificial intelligence, what role does the everyday person play in international conflicts? The result, they suggest, is a new landscape which must be understood in order to defend against new and largely unprecedented threats arising in an interconnected global environment.

From the outset, I found the authors’ use of quotes at the start of each chapter as an effective way of setting the tone for what was to follow. For example, the first quote selected for inclusion was uttered by Alexander Nix, former CEO of the firm Cambridge Analytica, which played a significant role in the 2016 U.S. Presidential election, who stated “It sounds a dreadful thing to say, but these are things that don’t necessarily need to be true as long as they’re believed.”

This merging of truth and fiction is at the heart of this book. Paradoxically, despite the immense amount of information available and ease by which it can be accessed online, the distinction is nearly impossible to draw given the proliferation of countless sources of information online pilfering their own stories, theories, philosophies, etc.

“Like War” illustrates this merging of fact and fiction through an examination of recent history and the emergence of social media to the forefront of public discourse as a means by which people began to experience the news together in cyberspace.

The book takes the reader back to the origination of the internet. On October 29, 1969, ARPANET came into being when a computer at UCLA was connected to a computer at Stanford. Bits of information were broken down and transmitted across 350 miles of leased telephone wire only to be reconstituted into a message.

Funnily, the scientists gathered around the computer screen watched as the message received was “LO.” In fact, the message was supposed to read “LOGIN” but the system crashed before the transmission was completed.

The authors state that “the first message in internet history was a miscommunication.” Additionally, I was interested to find out that that the founding father of the phenomenon popularized by President Trump as “fake news” can be traced back to 1772 when The New England Courant, one of the country’s first newspapers, published a series of letters penned by a “Mrs. Silence Dogood.” The actual writer happened to be a 16-year old apprentice named Benjamin Franklin. Yet, historically the spread of misinformation was always limited by the prevailing transportation of the day. The advent of the internet fundamentally changed that.

The authors suggest that the internet has moved beyond adolescence into “the most consequential communications development since the advent of the written word.” But it has emerged into a type of virtual information battlefield, destroying conventional wisdom as to what is considered secret versus that which is known.

I found the true persuasiveness of this book to lie in the stories it uses to illustrate its points, not limiting the reader to simply conjecture or theorize but putting that into practice through a real world lens. These stories are varied. They begin with the highly classified mission to get Osama bin Laden. That mission, despite the extraordinary lengths taken to ensure secrecy, was broadcast in real time by a non-journalist in Pakistan who happened to be posting the unusual helicopter activity overhead while working on a software project in Abbatobad.

Another story showcases the use of the derogative term “Macaca” by then Senator George Allen of Virginia during a campaign stop, an instance which quickly ended his political career and demonstrated that, in an environment where everything can be recorded, nothing was off the record.

The book then takes the reader through the attacks in Mumbai, the downing of the Malaysian airliner over eastern Ukraine, the Arab Spring, the rise of ISIS, the Great Firewall in China, and finally the age-old Russian strategy known as dezinformatsiya or disinformation, adapted for the internet age.

Throughout the book, I could not help but compare it to the dystopian British series on Netflix called “Black Mirror,” which uses fiction to suggest the extremes as to where technology can take us in the future. However, the real stories highlighted throughout this book are all the more impactful because they are real and all the more jarring.

For example, the statistic that today over 80% of fights that break out in Chicago schools are in fact instigated online. Digital sociologists describe the phenomenon as being one where social media creates its own reality, one which is “no longer limited to the perceptual horizon.” In that realm an online feud can seem just as real as a face-to-face interaction. In conclusion, this book aptly showcases the emergence of a new player in the “media” space. What were previously paid professional journalists and news organizations to serve as the conduit between the public and the news now had to contend with social media to occupy that same position. The book does so by highlighting two competing trends of veracity on the one hand and virality on the other.

Today veracity, the search for truth, no longer constitutes the currency on which social media is driven. To the contrary, social media platforms deliver value to users who visit the sites most frequently. The metrics that are calculated include the number of clicks, likes, retweets, and shares. These are the ways the value of these social media companies are based. “Like War” makes the reader think critically about information itself –where we get it, whether we believe it, what we do to assess its truthfulness, etc. Virality is the new norm, one in which the previously distinct realms of war and politics become merged. For, in cyberspace, the means by which the political or military aspects of this competition are “won” are essentially identical. Consequently, the engineers of Silicon Valley have become power brokers where their decisions shape the battlefield which is the internet.

The book finishes with optimism by suggesting people will best be served by acting more like concerned constituents, suggesting that the same basic law applies to us all: “You are now what you share. And through what you choose, you share who you truly are.” I, for one, would like to share this book and hope others take me up on giving it a read.