Secrets and Lies: Digital Security in a Networked World 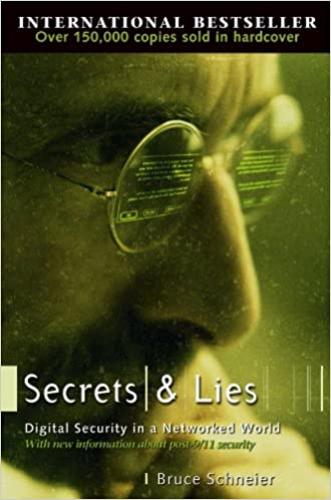 Secrets and Lies: Digital Security in a Networked World (2000) by Bruce Schneier

Secrets and Lies: Digital Security in a Networked World is the perfect book to hand to new bosses or new employees coming in the door who have not been exposed to cybersecurity in their past lives*. It is also the perfect book for seasoned security practitioners who want an overview of the key issues facing our community today. Schneier wrote it more than a decade ago, but he talks about a variety of ideas so ahead of their time that they are still relevant today. Concepts he touches on include:

The content within Secrets and Lies is a good introduction to the cybersecurity community, and Schneier tells the story well.

Secrets and Lies demonstrates Schneier’s evolution as an early thought leader in the cybersecurity community and outlines some key concepts that are still valid today.

Security Is a Process

In the preface, Schneier freely admits to thinking in his earlier life that cryptology would solve all of our Internet security problems. In Secrets and Lies, however, he is forced to acknowledge upfront that technology by itself does not even come close to solving these problems. You do not get security out of a box. You get security by applying people, process, and technology to a problem set, and the more complex we make things, the more likely it is that we are going to screw up the process.

People Are the Weakest Link

The weak link in all of this is the people. You can have the best tools on the planet configured to defend your enterprise, but if you do not have the qualified people to maintain them and to understand what the tools are telling you, you have probably wasted your money. This goes hand in hand with the user community, too. It doesn’t matter that I spent a gazillion dollars on Internet security this year if the least-security-savvy people on your staff take their laptops home and unwittingly install malcode on their machines.

When it comes to business risk, cybersecurity isn’t its own category separate from more traditional risks. What I have noticed in my career is that many security-practitioners and senior-level company leaders treat “cyber risk” as a thing unto itself and throw the responsibility for it over to the “IT guys” or to the “security dorks.” In my mind, this is one of our community’s great failures. It is up to all of us to convey that essential idea to senior leadership in our organizations.

Every new piece of software deployed has the potential to expose additional threats to the enterprise in terms of new vulnerabilities, and vendors have no liability for this. In other industries, if a vendor were to produce a defective product that causes monetary damage to a company, that company would most likely sue that vendor with a high probability of success in court. It is not like that in the commercial software business or even in the open-source movement. Vendors will patch their systems for sure, but they accept no responsibility for, let’s say, hackers stealing 400 million credit cards from a major retail chain. Schneier is aghast at this development that the user community has let vendors get away with this stance.

Secrets and Lies was the first time that I had seen an author characterize the adversary as a person or a group with motives and aspirations.

This was a revelation to me. At this point in my career, I just thought “hackers” were trying to steal my stuff. This is Schneier’s first cut of a complete adversary list:

In my work, I have found it useful to refine Schneier’s list of people into the following adversary motivations:

The bottom line is that these adversaries have a purpose, and it helps network defenders if they understand what kind of adversaries are likely to attack the defender’s assets.

Sadly, even though Schneier published Secrets and Lies in 2000, all of these things are still true, and there is no real solution is sight. Many organizations still think that installing the latest shiny security toy to hit the market will make their networks more secure. They don’t stop to think that they might be better off if they just made sure that the toys they already have installed on their network worked correctly.

People are still the weak link both in the security operations center (SOC) and in the general user community. As I have written elsewhere, talented SOC people are hard to come by, and many organizations still spend resources on robust employee-training programs, but the results are mixed at best.

CISOs are still struggling to convey the security risk message to the C-Suite. Most of us came up through the technical ranks and think colorful bar charts about the numbers of systems that have been patched are pretty cool. The CEO couldn’t care less about those charts and instead wants to know what the charts mean in terms of material risk to the business.

Finally, software vendors still have no liability when it comes to deploying faulty software that results in monetary loss to a customer. This just seems to be something we have all accepted, that it is much better to build a working piece of code first and then worry how to secure it later. I know entrepreneurs prefer this method because the alternative slows the economic engine down if developers spend time adding security features to a new product that drives no immediate revenue opportunities. But this is the great embarrassment to the computer science field: we have not eradicated bugs like buffer overflows in modern code. How is it possible that we can send people to the moon but we cannot eliminate buffer overflows in code development? Don’t get me wrong; the industry has made great strides in developing tools and techniques in these areas—just look at the Building Security in Maturity Model (BSIMM) project to see for yourself. But the fact that, as a cybersecurity community, we have not made it mandatory to use these techniques is one of the reasons we are still often considered a “field of study.”

In the end, Schneier makes the case for things that the cybersecurity community needs in order to make the Internet more secure. Long before the acronym became a staple on Certified Information Systems Security Professional (CISSP) exams, he advocated the need to strengthen confidentiality, integrity, and availability (CIA). He does not call it CIA in the book, but he talks at length about the concepts. He was prescient in his emphasis on the need for Internet privacy and Internet anonymity and was one of the first thought leaders to start asking the question about security versus privacy in terms of government surveillance. He also anticipated the need for a Bitcoin-like capability long before Bitcoin became popular.

Unfortunately, when you begin to write a technology book about the current state of the art surrounding cybersecurity, much of what you write about is already outdated as you go to press. As I was rereading Schneier’s book, I chuckled to myself when he referenced his blindingly fast Pentium III machines running Windows NT. The world has indeed changed since 2000.

Schneier wrote Secrets and Lies at the time when the industry had just accepted that a stateful inspection firewall was not sufficient to secure the enterprise.

“Today’s firewalls have to deal with multimedia traffic, downloadable programs, Java Applets, and all sorts of weird things. A Firewall has to make decisions with only partial information: It might have to decide whether or not to let a packet through before seeing all the packets in transmission.”

As of May 2014, the cybersecurity community is mounting a bit of a backlash against the vendor community’s conga line strategy. Practitioners simply can’t manage it all. The best and most recent example of this is the Target data breach. Like many of us, the Target security team installed the conga line of security products and even had a dedicated SOC to monitor them. According to published reports, the controls dutifully alerted the SOC that a breach was in progress but there was apparently so much noise in the system (and perhaps Target’s process was not as efficient as it could be) that nobody in the organization reacted to the breach until it was too late. It’s a perfect example of why many organizations are looking for simpler solutions rather than continuing to add new tools to the security stack.

According to Schneier, underlying everything is cryptology. As you would expect from a cryptologist, Schneier believes that his field of study is the linchpin of the entire idea of Internet security.

I agree. (Note: The difference between the terms cryptography, cryptanalysis, cryptology, and cryptologist is left as an exercise for the reader.) I would say that the cybersecurity community has failed in this regard. While it is true that cryptography is the underlying technology that makes it possible to secure the Internet, it is still too complicated for the general user to leverage. In light of the Edward Snowden revelations —that we not only have to worry about foreign governments spying on our electronic transmissions, but we also have to worry about our own government doing it—the fact that most people do not know how to encrypt their own email messages as a matter of course is a testament to our industry’s failure.

Schneier makes a distinction between computer and network security, that the conga line of security tools that make up the security stack at the network perimeter is not the same as the set of tools you need to secure the endpoint. While this is still true today, the cybersecurity community has merged these two ideas together since Schneier’s book was published.

The thought is that it does not make sense to consider network and endpoint security separately; it makes more sense to think of everything as a system, as we do at Palo Alto Networks. As organizations develop indicators of compromise at both the network and endpoint layers, essentially the Kill Chain model, the cybersecurity community can develop advanced adversary profiles about the attacker’s campaign plan.

*Full disclosure: The first civilian job I took after I retired from the US Army was with the company that Bruce Schneier founded called Counterpane, so I may be a little biased.