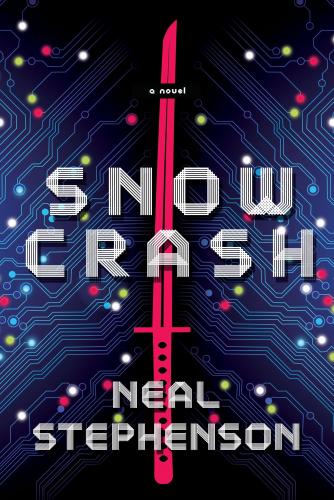 Every cybersecurity geek on the planet should embrace this book. It has everything that we like: Metaverse hacking, real-world swordplay, awesome weapons, and—to cap it all off—the hacker ends up with the girl.

Neal Stephenson is a cyber geek of the first order, and his personality is all over this story. His description of the “Metaverse” and the “avatars” that live in it, both terms he made famous in this book, are so prescient that anybody playing World of Warcraft or using Second Life today would feel right at home. Stephenson is an author who truly understands the hacker culture, so it’s not surprising Snow Crash wound up on Time magazine’s list of 100 novels everyone should read, among countless other accolades.

Why It Holds Up

I recently reviewed the classic cyber punk novel Neuromancer, so I figured I would continue the trend and review another classic in the genre to see if it too still holds up. Well, that, and as I’ve already mentioned, Stephenson is one of my favorite authors in this or any genre.

I first learned about Stephenson after reading his excellent article called “Mother Earth Mother Board” in Wired Magazine in 1996. He told the story about how the world is connected through massive runs of transatlantic cables that traverse the ocean floors and electronically and physically connect three continents to each other. To do the research, he traveled to each location where the cables made landfall and told the story about how it all comes together. But it was not until I read Cryptonomicon and In the Beginning...Was the Command Line, both published by Stephenson in 1999, that I became a fan. Cryptonomicon is the best “hacker” novel I have ever read, and after encountering that, I went scurrying back to the library to see what else Stephenson had written. That is when I stumbled upon Snow Crash.

Stephenson wrote this book in 1992, eight years after Neuromancer. At this point, authors well understood the main ideas of the style: stories written in a near dystopian future where technology is advanced, governments have withdrawn in potency to be replaced by corporations, and man-machine interfaces and cyborg beings are the norm. But Snow Crash was like nothing I had ever read before. This was my first cyber punk novel (I still hadn’t read Neuromancer for the first time), and every page read like the author was dropping new ideas onto the page like Mardi Gras beads hitting the ground on Bourbon Street. Stephenson wanted to have some fun with it, and the opening pizza-delivery scene reads like you are being launched out of a cannon.

Snow Crash’s main character is named Hiro Protagonist (see what I mean about having some fun?), a self-proclaimed master swordfighter, hacker in the three-dimensional Internet space called the “Metaverse,” and pizza deliveryman. He teams up with YT (Yours Truly), a 15-year-old skater girl courier, and Uncle Enzio, a mafia kingpin and bankroller for the good-guy team. The bad guys are represented by L. Bob Rife, a Pentecostal evangelist and fiber-optic monopolist, and Raven, a motorcycle-riding, nuclear-bomb-wielding Aleut—as in Aleutian native—who is roughly the size of a house. The catalyst to all of this good-versus-evil business is Snow Crash, a virus that works both in the “Metaverse” and in the real world that L. Bob Rife intends to use to infect the world.

Snow Crash itself is a neural-linguistic virus. By that I mean that Snow Crash is a meme that was buried deep in the human brain and forgotten until the bad guys in this story figure out how to unlock it. Stephenson leverages the theory of memetics that was introduced by Richard Dawkins in 1976 with his book The Selfish Gene.

Dawkins said that memes may be another way that humans evolve other than gene mutation. According to the theory, memes are ideas that humans transmit to one another across generations and may account for long-lasting ideas like religion, morality, and crop rotation.

In this story, pre-Christian religious leaders controlled the masses with the Snow Crash meme. The virus’s secrets were lost to history until L. Bob Rife (the story’s bad guy) rediscovered them and found out that hackers plugged into the “Metaverse” were susceptible to the digital virus that used them. Hiro asks his girlfriend, “This Snow Crash thing – is it a virus, a drug, or a religion?” She replies, “What’s the difference?”

According to Stephenson, he invented the term “Metaverse” for this book. Readers will most likely associate the “Metaverse” with online role-playing games (RPGs) like World of Warcraft and online heightened-reality experiences like Second Life. But Stephenson’s description of the “Metaverse” in the first 30 pages of Snow Crash is almost a blueprint to building these kinds of worlds. When you consider that the designers of Google Earth used Stephenson’s description as a model and that he published the book two years before World of Warcraft debuted and 11 years before Second Life launched, you realize just how prescient Stephenson was. In a perfect example of the definition of “meta,” players in the Second Life Metaverse annually reenact the Snow Crash novel.

The term “avatar” originates from Hindu mythology and refers to the form of a god living on earth. Game designers adopted the term to represent characters in RPGs as far back as 1979. But Stephenson’s use of the word to describe his characters’ online personas—not just any character but the representation of his or her own personality in the “Metaverse”—catapulted the word into the popular culture, so much so that the word was common enough for James Cameron to use as the title of his blockbuster movie in 2009.

By culturally defining “avatars” and the “Metaverse” for the geek crowd and being one of the first Internet commentators to realize how important memes are, Snow Crash is must-read for any Internet history enthusiast and security professional. It is canon. You should have read this by now.