Where Wizards Stay Up Late 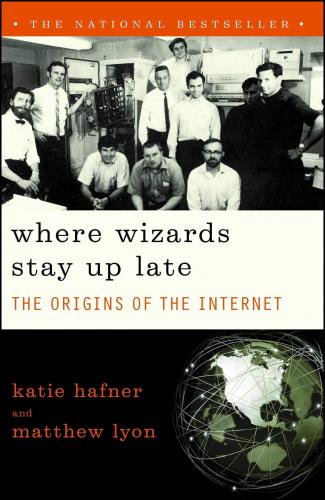 This book chronicles the true early beginnings of the Internet and the many hard-working engineers and computer scientists along the way that designed and built it from the ground up. Cybersecurity practitioners across the spectrum today, from policy wonks all the way over to the deep-level geek malware researchers, will get a kick out of learning about the eccentric personalities of the people that built the Internet and their robust designs that provided a catalyst to the greatest economic and social change engine ever invented. For the youngsters out there, this is a history lesson. Be quiet and take your medicine. You need to know this. Trust us. For the old timers, you have heard most of this stuff before in drips and drabs. Wizards will put it altogether for you. You should have read this by now.

I am not a techie. I believe it is "chic to be geek" but I am not a full-fledged geek. There are a few things you must realize. First, I am under "orders" to write this review. OK, so maybe not technically under "orders" to write this. But as a member of the Cybersecurity Canon Committee and the only lawyer in the group, I am the committee member most likely to write a review for books that fall into the non-technical category such as history where Wizards firmly settles. Next, I am part-geek, but still being only part geek I wanted to reference and use many other reviewers’ comments in order to insure a fair review of this material.

In Where Wizards Stay Up Late the Amazon.com reviewers overall rated it a 4.5 out of 5 stars with 61 out of 96 giving it the top marks of 5 stars.  And, to summarize many of those reviews, this is a good book if you are in the field or thinking about studying the subject. If not, then as one reviewer said, it may feel more like you are reading a textbook instead of being drawn into a page turning read. Cybersecurity Canon candidate books are supposed to be essential to the cybersecurity practitioner. I would classify how the Internet got started as being related to our field.  With that said, the origins of the Internet are extremely complex with "many fathers,” as Hafner puts it. Explaining this complexity requires an intelligible history that connects the technology story to the people that invented the technology.

After the launch of Sputnik President Eisenhower's (already developed) passion for "his scientists" increased.  When he was told, “all scientists are Democrats” he replied, “I don’t believe it, but anyway, I like scientists for their science and not their politics.”

On January 7, 1958, Eisenhower sent a message to Congress requesting startup funds for the establishment of the Advanced Research Projects Agency (ARPA) recognizing, as Hafner explains, “the need for single control in some of our most advanced development projects.” Things looked rosy for the new agency: grandiose budgets, plans developed and flourished, right up until a little agency called NASA showed up, enacted under law, and gutted ARPA's budget and programs.

Hafner writes, “Aviation Week called the young agency a dead cat hanging in the fruit closet.” So the staff of ARPA decided to tap into university research projects and focus on the “far-out” research. The universities responded sensing that dollars would flow their way to conduct “high-risk, high-gain” research. But what fell into ARPA’s lap, and more importantly its funding, was the upkeep of an Air Force computer, the Q-32.

It was recognized that, as Hafner explains, “computers, as they related to command and control, might one day provide high-speed, reliable information upon which to base critical military decisions. That potential, largely unfilled, seemed endlessly promising.” That identification of a government mission that no one else was doing sent ARPA on its way to develop not only computers and networks for the underlying funding requirements of a network for military command and control, but as scientists and university researchers, to develop the open and collaborative research networks for their peers.

As the review from Publishers Weekly points out,

“…While the book attempts to debunk the conventional notion that ARPANET was devised primarily as a communications link that could survive nuclear war (essentially it was not), pioneer developers like Paul Baran (who, along, with British Scientist Donald Davies devised the Internet's innovative packet-switching message technology) recognized the importance of an indestructible message medium in an age edgy over the prospects of global nuclear destruction. “

The story follows those pioneers from ARPA and the engineering firm of Bolt, Beranek and Newman, as well as dozens others that combined hardware and software to establish the ARPAnet and send us on our way to the Internet. With so many “Internet fathers,” how can a review capture them all?  The book does a great job recognizing many of those that were behind this adventure. And like our founding fathers, what is amazing is their age and their unique opportunity to be “engineering pioneers and discoverers.”

The idea of graduate students or young “new” engineers working on this equipment with their unsupervised responsibilities seems totally unimaginable, particularly in today’s age of established firms with government contracts and oversight. Wizards does a good job explaining their contributions and admirably lends a little context to their personalities, their drive, and their ability (or lack thereof) to be a team player.

So you want to learn about this technology in this period?  This is the book for you! The description of the hardware and software development is well done and detailed.  I know more about IMPs now than I probably ever really wanted to and I think this is where the book makes its mark.  If you are in this business and want to dive into the technological development of the ARPAnet and its protocols, without pulling out the IEEE white papers or RFCs, this is for you.

This is a worthy book for inclusion in the Cybersecurity Canon nomination list for both the techies in the community and the non-techies. For the non-techies in the crowd  -- policy-wonks, lawyers, etc. – Wizards will help you understand enough about the technology that will enable you to converse with techies at some level.

While I agree with other reviewers I’ve seen who say they wish it read better as a story, Wizards does provide a great understanding of the technology and gives you a feel for the pioneers that made it happen.  And there is no better way to find acceptance into a community that will shun you without the appropriate bona fides (either through education or work experience) then to learn to speak the technology and know the names and backgrounds of the pioneers and giants in this field.  This book will definitely give you that information.  For the techies in the group, you are going to get a birds-eye view of how the engineers conceived and implemented the beginnings of the Internet.