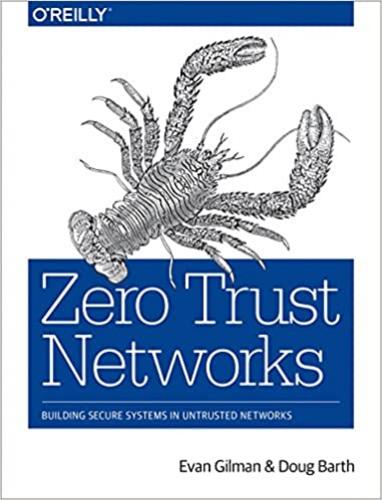 Ken Thompson was the co-winner of the 1983 Turing Award. While his acceptance speech for Reflections on Trusting Trust is 35 years old, a most timely observation of his is that “You can't trust code that you did not totally create yourself. No amount of source-level verification or scrutiny will protect you from using untrusted code.”

As complex as networks were in 1983, they are exponentially complex now. And are now correspondingly more difficult to secure. By taking a Zero Trust approach, one can create systems and networks that are much more secure.

The notion of the Zero Trust network, or ZTN, was created in 2010 by John Kindervag, then of Forrester Research. (Full disclosure: Kindervag is currently the field CTO at Palo Alto Networks). Truth be told, ZTN was way ahead of its time then, and to a limited degree, still is. But Kindervag felt that as enterprises were slowly moving towards a data-centric world with shifting threats and perimeters, a new concept of what constituted a secure network had to be created.

In a world of Zero Trust, all network traffic is considered untrusted. What this means from a security perspective is anything that connects to that network must be fully secured. Much of a ZTN is predicated on strong authentication and access control, rounded out by effective data inspection and logging.

Most security professionals, and especially those studying for the CISSP exam, by default think of the three-tier network architecture of the internet, DMZ and trusted internal network. The ZT model throws that away and treats every device as if it’s an untrusted internet-facing host. This means that every host on the internal network is considered hostile and compromised. To say this can create cognitive dissonance for some information security professionals is an understatement.

That traditional architecture, often called the “perimeter model” on the CISSP exam, protects systems and data by creating a line or lines of defense that an attacker must penetrate before gaining access to the network. The ZTN is a replacement for that now flawed model.

In Zero Trust Networks: Building Secure Systems in Untrusted Networks (O’Reilly Media 978-1491962190), authors Evan Gilman and Doug Barth have written a first-rate guide that details the core concepts of ZTN, in addition how to implement them. Note to the reader: if you think that designing and building a ZTN is plug-and-play, think again. Parenthetically, the authors write of the dangers of UPnP, which can allow any application to reconfigure a device. In the ZT model, this would never occur as there is a chain of trust between the host policies.

The perimeter and Zero Trust models are quite different from each other. In the perimeter model, walls are built between trusted and untrusted resources. In a ZT model, everything is considered to be untrusted.

At the RSA 2018 Conference, there were a few vendors touting Zero Trust solutions. The concept is still a few years away from being ubiquitous, but it is growing. From a security perspective, it is certainly an idea whose time has come. But the future growth of ZTN will likely be quite slow.

So, just what is this thing called a ZTN? The book notes that a ZTN is built on these fundamental assertions:

A ZTN is particularly valuable when it comes to mobile devices. The authors write that, surprisingly, neither iOS nor Android ships with a host-based firewall. For those, the ZT model introduces the concept of single packet authentication, or SPA, to reduce the attack surface on a mobile, or in fact any, host.

Chapter 9 details how to actually create a ZTN. The ZTN is predicated on seven fundamental concepts. A few of them include that all network flows must be authenticated before being processed; all network flows should be encrypted before being transmitted; all network flows must be enumerated so that access can be enforced by the system; and more. Implementing those concepts is a challenge, but the benefits of a ZTN are quite compelling and make security sense. This chapter should be seen as a high-level introduction to the topics, as the notion of building a ZTN is far too complex and challenging to be fully covered in this 34-page chapter.

The authors are not so naïve to think that ZTNs are a complete information security panacea. They are honest enough to note that ZT, like every technology, protocol and the like, are subject to attack. The book closes with how adversaries could attack a ZTN. From social engineering, DDoS and more, these must be considered when deploying a ZTN.

The concept of a ZTN forces network designers to rethink almost everything they know about security network design. As attacks get more sophisticated and network perimeters become more porous, the need for a ZTN will become more compelling. A ZTN is leading-edge infosec, but it won’t likely stay that way for much longer.

ZT moves security from the network, obliterates the notion of a perimeter, and places it in the realm of identity and application-based security. For those looking to get a head start on what the future of a secure network may look like, Zero Trust Networks: Building Secure Systems in Untrusted Networks is an excellent reference to get a solid introduction on the concept.

A Zero Trust network is based on the notion that both internal and external networks simply can’t be trusted. That’s a great approach to take for information security in 2018.

For those looking to increase their enterprise security to deal with the realities of the threats of 2018, Zero Trust Networks: Building Secure Systems in Untrusted Networks is a title worthy to be in the Cybersecurity Canon.